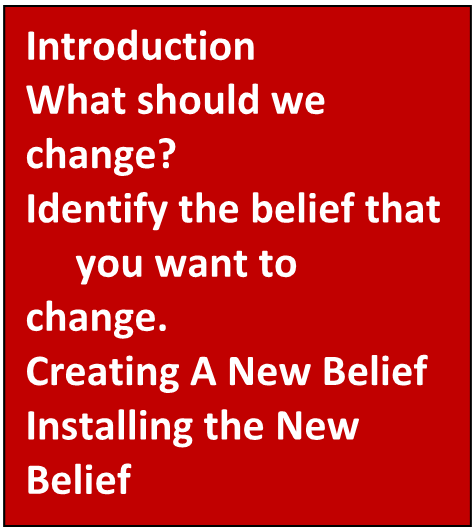 We are about to take a big step. Changing your beliefs can change your life in small, moderate, or immense ways, so take your time and persist with patience. This process works and is therefore a powerful method for taking charge of your life.

In this Letter we are considering the following process:

WHAT SHOULD WE CHANGE? 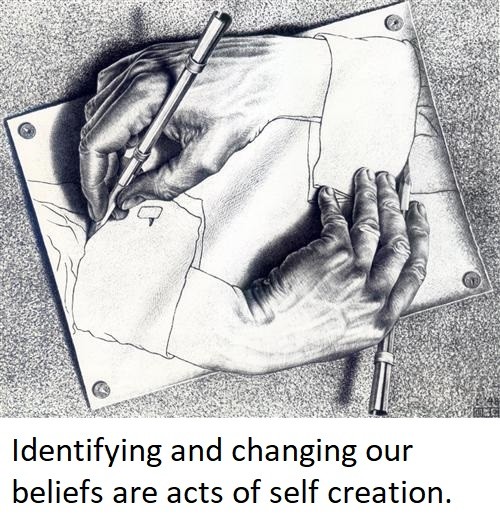 When we want to accomplish change we begin by changing our thinking. Changing our feeling and acting—what we do, follows. Some changes are accomplished simply by making a new choice—we “change our mind,” Or, we decide on a new course of action and following through with that action does not present any significant problems. Other changes (like changing core beliefs for example), can be more complex. Changing our thinking then involves changing our beliefs. We need to consciously change a belief or beliefs, because without this step the change we seek cannot be accomplished.

IDENTIFY THE BELIEF THAT YOU WANT TO CHANGE

You have identified the painful feeling or feelings in your reaction to a situation. We know how to identify the beliefs behind a painful feeling. See the May 2018 letter https://iifsd.org/library/newsletters/may-2018-letter/. To identify the beliefs involved with a desire to create something new we start by planning a course of action, that may or may not involve goal setting. When faced with actions we want to take the question is, “What must I believe to act in this way?” We have also explored this question as a starting point in the May letter.

Having identified the change we seek and the beliefs involved, we are ready to change the belief.

When we simply “change our mind” we drop old beliefs. This can be done without full awareness of what we are doing. With the more complex change that involves changing beliefs we usually need a new belief to replace the belief we want to change. (The second step is to “install” the new belief making it part of us.) Here are some ways to create a new belief.

When you “install” the new belief in your subconscious mind, you make it a part of you. It is not something you have to think about. The belief operates automatically. You have integrated it into your belief system. This is easy with some beliefs and difficult with others. The difficulty occurs when resistance is encountered. Here are some ways to install a new belief and overcome resistance.

Point of Empowerment: Once you have changed your beliefs by creating new beliefs and installing them, your life experience will change if you have completed the process successfully.

LIVING YOUR NEW BELIEFS—PUTTING THE BELIEFS INTO ACTION

You have changed beliefs and installed them. You will be presented with situations, either external life situations or the way you are thinking and feeling, that challenge your new beliefs. Be aware of your experience—you’re thinking, feeling, acting, and reacting. Is your experience reflecting your new beliefs? If not start with examining yourself for resistance—some reluctance to accepting and acting on the new beliefs. Resolve any resistance you discover by identifying and changing the beliefs that give rise to the resistance. (See February and March 2017 Letters about resistance. https://iifsd.org/library/newsletters/) If you don’t sense resistance, redo the changing belief process, not necessarily every detail, but at least reviewing the steps.

We have detailed the steps of a complicated process, complicated because human beings are complex beings. However, with practice the process can become easier. As a therapist or counselor, using the process with clients makes it easier to use with yourself.  Next month we will examine some expansive beliefs and use them to illustrate the process of changing beliefs.

The Operating Manual for the Self presents many new and innovative ideas that can challenge and expand your belief system.